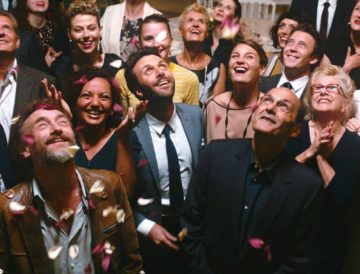 Max has run a catering company for 30 years. He has planned hundreds of parties and he’s starting to grow tired. Today is Pierre and Helena’s big day. They are getting married in a sublime 17th-century château.

As usual, Max has organized everything. He recruited his team of waitpersons, cooks, and dishwashers. He advised the couple on a photographer, reserved the band, took care of the flower arrangements: everything to make the party a success.

But a series of mishaps upends a very tight schedule, and every instant of happiness and emotion could veer into disaster and chaos.

From the preparations to daybreak, we get a behind-the-scenes look at a wedding party through the eyes of the people working on it. They will all have to count on their one common quality: they know what it means to throw a good party.