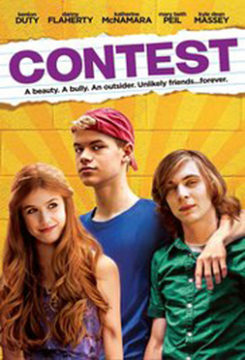 Matt (KENTON DUTY, Popular teen star of Disney’s “Shake it Up"), a high school's most popular star athlete, has a great time bullying the awkward Tommy (DANNY FLAHERTY “Annie,” FX's "The Americans," MTV's "Skins," Showtime's "Nurse Jackie," and the Scorcese film "Wolf of Wallstreet”).
Matt's dream of an athletic scholarship sinks, however, when the school's principal becomes tired of his shenanigans and threatens to kick him off the swim team unless he turns things around.

While Matt tries to figure out how to appease the school, Tommy has entered a teen cooking contest in the hopes of using the prize money to save his grandma's prized pizzeria. Matt's older brother Kyle (KYLE DEAN MASSEY, “Hart of Dixie," “Wicked") - who has an underhanded interest in the pizzeria going under - urges Matt to feign friendship with Tommy, both to pacify the principal and, at the same time, sabotage Tommy's chances of winning the contest.
Matt proves to be great in his role as fake friend. He even gives Tommy advice on how to win over his secret crush, Sarah (KATHERINE McNAMARA Popular teen star of Disney’s Madison High,” Disney Channel’s original movie “Girl vs. Monster,” Disney shows like “Kickin It” and “Jessie” and the feature “New Years Eve”).

As they spend more time together, each boy begins to see the other differently. And as the end of the contest nears and the stakes grow higher, Matt and Tommy learn what's important and who their real friends are.