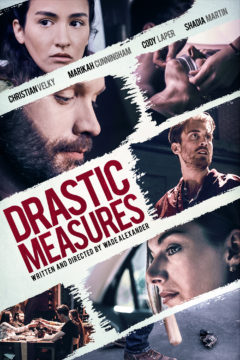 A thriller drama, “Drastic Measures” holds all the cards in telling a story about love and revenge. When a disgruntled husband and wife, Ben and Claire, attempt to rekindle their marriage, they decide to take a therapeutic trip to a cabin in the woods. Upon short arrival, a young and unexpected couple appear and soon come to spend the evening with them. However, as the married pair learn more about these newcomers, they quickly discover that their guests possess a dark secret — one that surrounds the question: How far will some people go to protect the one they love?