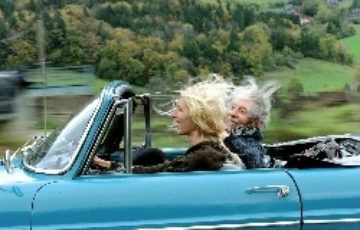 At over 80, Claude Lherminier has lost none of his charm and presence. Dressed in a white linen suit and a colorful cravat, we meet him on a plane bound for Florida. On a whim, Claude has decided to visit his youngest daughter, Alice, who is married to an American and living in Miami. Soon we’ve rewound several weeks to follow the events leading up to Claude’s trip.
Claude has two daughters, Alice and Carole. Carole, the eldest, is the single mother of a 20-year old son. Things are not easy for her, whether in the workplace or sentimentally. In addition, she is the one who has to take care of her father, who has lately been having trouble with his memory.
It’s hard to say just how advanced Claude’s condition really is. Often he plays up his forgetfulness and uses it to tyrannize the people around him. At other times he seems truly lost, confusing faces, places and even his age. That discrepancy, as comical or as droll as it may sometimes be, gradually becomes the cause of his friends and relations’ distress.