Home / Cinema / From Africa With Love 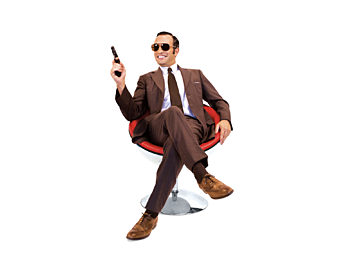 From Africa With Love

1981. The world has changed since the last adventures of OSS 117, France’s finest secret agent. Feminism is gaining ground, computer technology is developing… and Communists lurk everywhere.

In the midst of all this tumult, France sends its top spy to Africa to help out President Bamba, whose reelection is threatened by rebels led covertly by his young wife!

This mission is trickier, more treacherous, and more torrid than ever. And OSS 117 must, for the first time, team up with a young rival with considerable assets: the up-and-coming OSS 1001. Replacement, partner or competitor?

Legendary secret agent OSS 117 is back and better than ever in this third opus about the hilarious and politically incorrect world of French espionage. Co-written and directed by Nicolas Bedos, following his triumph at Cannes with La Belle Epoque.

After Cairo and Rio, Jean Dujardin re-dons the suit of France’s coolest, most stylish superspy in a film full of adventures and instant-cult dialogue. Dujardin faces off against Pierre Niney, seductive, dynamic and ready to accept the challenge!