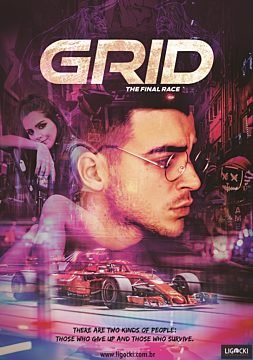 21 young, top-rated Formula 1 gamers are kept in isolation while they hone their skills by driving real racing cars. The winner will pit his skills against a champion Formula 1 pilot in a final, thrilling duel.

Fausto was born into a family of race car drivers who had been banned from the tracks. His family would do anything to make Fausto a champion pilot and put the family back on the podium, their rightful place. However, an unfortunate accident at age six threatens Fausto´s health, and he is now so fragile that the even a slight bump to his head could kill him instantly.

To safeguard him from contact sports and typical, rough young boys’ activities, his family supplies him with videogames. Inevitably, Fausto discovers car racing games and soon becomes a champion gamer. With time, and his growing skill, he beats the world record on one of the Formula One virtual tracks.

When he turns 16, a Formula 1 representative knocks on his door with a special invitation to take part in a reality show, along with 20 other top Formula 1 gamers. The show will be broadcast worldwide on the web, and Fausto will have his big chance to become a real pilot.

GRID is a modern teen action film with lively scenes and intelligent dialogue, focusing on the dangerous rites of passage adolescents face as they grow into adults. Fausto will discover there are two kinds of people in the world: those who give up and those who survive.