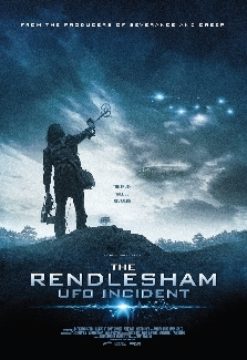 From the producer of Creep, Severance and Triangle, The Rendlesham UFO Incident is a found-footage alien encounter movie set near the Rendlesham air base, the site of one the most infamous incidents of extra-terrestrial contact involving US military personnel in the 1980s.

Keen treasure hunters Gus and Sally invite their friend Jake to film them illegally ‘nighthawking’ on private land, in search of a hoard of Saxon gold.

When their search inadvertently leads them onto land owned by the Ministry of Defence, the group encounters what they can only explain as intense extra-terrestrial activity blinding flashes of light, alien craft moving in formation, objects flying at phenomenal speed.

Frightened and lost, the group stumbles upon Hangar 10, an abandoned secret military facility. Here they uncover the truth behind the events of 30 years ago as they become accidental participants in a terrifying new alien incursion.