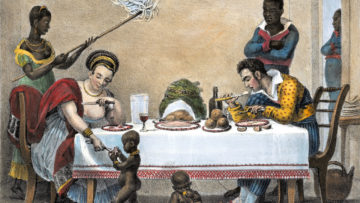 Saga of a Portuguese-Brazilian family who lived the dramatic events which marked the independence of Brazil from Portugal in 1822.

Based on family letters, Portuguese consul in Brazil seeks to rescue the history of his ancestors. In flashbacks we return to Brazil’s first quarter of the 19th century when Luiz Paulino, an officer in the Portuguese army, his wife Maria Bárbara and their children, Bento, Luiz Garcez and the girls Sabina and Mimi experience the anguishes of the clash of two cultures in transformation. Under the backdrop of the War of Independence from Portugal in 1823 in Bahia, dramas, dreams, loves, hates constitute the plot of the narrative. Luiz Paulino, in the name of loyalty to the king, is led to command the cruel execution of Brazilian patriots. He dies with tuberculosis and far from the family he loved so much. The two brothers take opposite sides in the war. The matriarch Maria Barbara will have to maintain the union of the family at the head of the Aramaré mill. Interpreted by Portuguese and Brazilian actors, filmed in authentic locations, with an award-winning script highlighting Millôr Fernandes’, foremost Brazilian humorist and playwright, characteristic humor, the film immerses itself in the origins of the Brazilian nation with meaningful social and political implications to present realities.