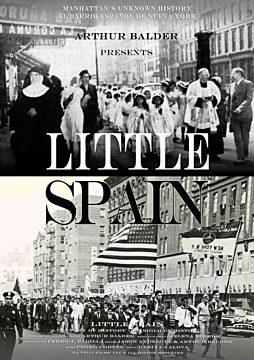 ‘Little Spain’ is a documentary that offers, next to second-generation Spanish-American and Hispanic-American testimonies of what was like the neighborhood called Little Spain in the heart of Manhattan back in the 40s, 50s, 60s, also, and more importantly, a unique and fascinating archive that offers a clear, well-documented view of those decades and their precedents.

The research unveils a treasure trove of old photos and other documents. These photos are copyrighted material and can only be seen in this film. That is why the film has become a much-sought source for researchers, academic libraries, college libraries, specialized writers (of fiction and non-fiction) and public libraries across the USA. In 2016 Spanish writer María Dueñas purchased three copies of the film as part of her research for developing her best-selling novel “Las hijas del Capitán”. Robert Sanfiz , president of La Nacional in Manhattan, tells himself the history of that Spanish social and meeting point, and also reads the voice-over.

The film was part of the Official Selection DOCUFICX of the Gijon International Film Festival in 2015, a FIAPF specialized cinematic competition. The film won the Latin ACE Award (Premios ACE, by the Association of Latin Entertainment Critics of New York) in 2015 for Best Documentary Film of 2014.

The film reviews have hailed the investigative and cinematic work as ‘a kind of masterpiece’ and ‘an aesthetic feat’ by such iconic critical voices as the Ph.D. Donald Kuspit, one of the most important American critics of the Postwar era.