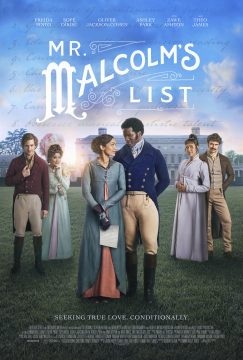 Mr. Malcolm's List is a witty and playful romantic comedy, a Black List discovered screenplay and soon to be a globally published novel.

Set in early 1800's England, Julia is a young lady of society being courted by a mysterious and wealthy suitor, Mr. Malcolm - the biggest ‘catch’ of the season. When she realises she doesn’t match Mr. Malcolm’s list of unattainable demands for his future wife, humiliated, she begins to plot her revenge.

She recruits Selina, a childhood friend, to trick Malcolm into thinking he has found his match and falling in love, by meeting every qualification on his list. But things don’t exactly go as planned, and soon Malcolm is not sure whether he has discovered the perfect woman... or the perfect hoax.