Home / Cinema / Only If We Were Fish 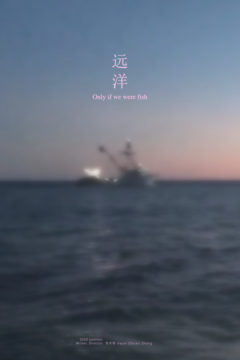 Only If We Were Fish

A missing Chinese fishing vessel reappears after months with only 11 out of its original 33 members. Through the memory of one of the survivors, ZHAO, aspiring investigative journalist HUANG tries to find out what really happened on the vessel.

Wanting to take a break from his current job as an editor for a fashion magazine, journalist HUANG (35) decides to write about a strange case revolving a fishing vessel that went missing in Pacific Ocean and returned months later with only 11 of its original 33 crews. He goes on a trip to a remote village in northern China. There he meets with one of the survivors, ZHAO (30). ZHAO guides HUANG through his moribund industrial town, at the same time recounting dark events that happened on the vessel.

The following is what ZHAO recounts to HUANG: “The fishing crew sailed off with people from different social backgrounds. As time passed, the crew became increasingly unhinged by the solitude and inhumane working conditions that comes with being in the sea. Things escalated when LIU (23), an ordinary crew member planned an uprising against those on top of the hierarchy, hoping to end their voyage and return home. After conducting violent attacks on the captain and his staff, LIU also began manipulating the rest of the crew into turning against each other, even killing one another. A new ‘reign’ under LIU had begun, and a rule was instated: ‘To be trusted, one must be wet with blood.’”

When ZHAO reaches the point of the story where he killed someone to survive, he claims that his memories of the details have been lost. HUANG takes it upon himself to investigate further at the port where the vessel sailed off. There, he learns of ZHAO’s own actions through local police's report.