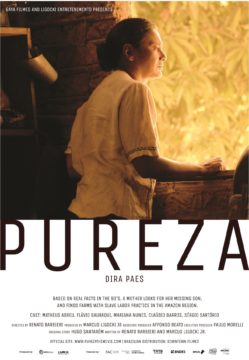 In the 90’s, a mother looks for her missing son, and finds farms with slave labor practice in the Amazon region.

Feature film inspired by real facts about a mother (Pureza), that after 6 months with no news from her son, Abel, who had left for the gold mines in southern Pará, departs from her native town, only with the clothes on her body and few savings in her purse. She retraces Abel’s path, and ends up finding a system of alluring and seizure of rural workers, putting them in a slavery condition. Pureza, hoping to find Abel, gets employed in one of the farms, where she witnesses the brutal treatment of workers and deforestation. She escapes and denounces the facts to the federal authorities. Without credibility, and fighting against a strong and perverse system, she returns to the forest to collect evidence of what she reported in Brasilia. After years, she finds her son, and her denunciations triggers a process that organizes the Brazilian government and that liberates thousands of workers from the situation of so-called “modern slavery” or “debt slavery”.