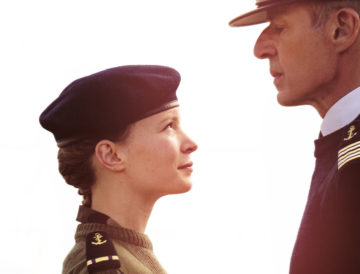 Laure is 22 years old. After successfully studying literature, she enlists in the army as a communications officer. She will have to learn to fit in and bide by the rules in this strict, hierarchical system. But Laure is determined. Headstrong.

She is under the orders of Commandant Rivière - aloof, short-tempered, demanding. Yet his harsh demeanor makes her all the more motivated to succeed. Rivière may not show it, but he is destabilized by this young woman. She surprises him. She shakes
him up.

Their relationship is difficult to grasp. Unsettling. It will force Laure to go beyond her limits and prove herself.

The story of the emancipation of a young woman in a very masculine world.

An unrelenting film starring Diane Rouxel (first seen in Standing Tall) and Lambert Wilson (The Odyssey) about a complex and unsettling relationship, by the producer of Courted.