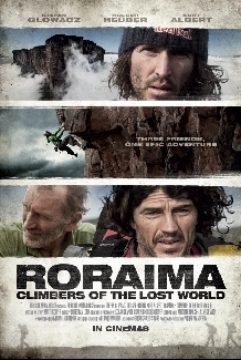 Roraima - Climbers of the Lost World

The stars of this feature documentary have been legends long before this trip: Stefan Glowacz, competitive climbing’s first superstar, Holger Heuber, and the founder of the Red Point Climbing Movement Kurt Albert. What attracts this experienced group of expedition climbers is never just the sports challenge, but the adventure of discovering new and heavy routes in areas that have not been explored before. Their current mission takes them to the most challenging and dangerous mission of their lives. Refusing any technical or motorized help along the way, the three friends set out to conquer the spectacular daunting Mount Roraima. With its perilous overhanging walls, impenetrable fog, rushing waterfalls that tumble down the rock face and a route yet to be discovered, the mesa represents the impossible. But before they can even attempt to tame this South American monster, they first must fight their way through the mystic “Lost World” jungle, all the while enduring punishing conditions of 40-degree heat and torrential rain.

Climbing Film Productions standards never seen before have been applied in this 500 meter pendently wall at “The end of the world”. Never before seen images take us not only to unimaginable places never touched by man before but also inside the head of the fear defying explorers, letting us not only experience breathtaking moments natural beauty but also of loss, humanity and friendship.