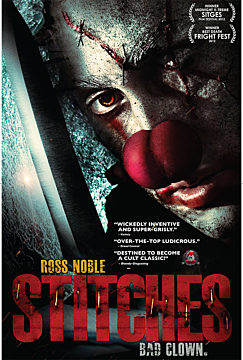 Years after a prank on young Tommy’s birthday left hired clown Stitches dead on the kitchen floor, Tommy’s childhood friends plan one last birthday party to end all parties. But they didn’t count on the degenerate jester returning from the grave to seek vengeance on the teens who caused his untimely end. Now the friends are on the run from an undead jokester who’s ready to use every trick in the book to exact his revenge. Dead Meat director Conor McMahon delivers a delirious slasher with STITCHES, the hilariously twisted and blood soaked tale of one very bad clown.