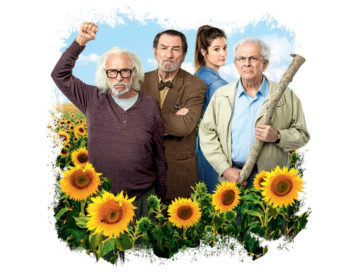 Friends since childhood, Pierrot, Mimile and Antoine are all rather zealous, distinctive and obstinate in nature. Before Antoine’s wife kicked the bucket, she left him a farewell letter full of revelations. Mad with rage, Antoine grabs his rifle, leaps into his car and heads for Tuscany: never too late to avenge an infidelity! Determined to stop him from making a huge blunder, Pierrot and Mimile follow in hot pursuit, assisted by Sophie, Antoine’s heavily pregnant granddaughter who has inherited the sweet eccentricities of her grandmother...

A feel-good comedy adapted from a true phenomenon of the comic-book world (1M copies sold in France, translated into 6 languages!).
Politically incorrect and endearing pensioners embark on a jubilant road movie between France and Tuscany. A trip between the wild times of the 60’s and today, very human and colorful!