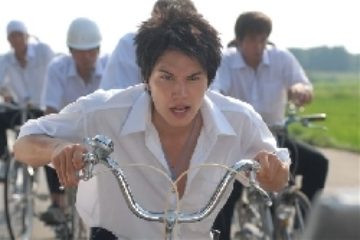 A countryside town, 1979. Our protagonist, “Mamachari” (Hayato Ichihara), is an ordinary high school student with full of first-rate ideas. One day, one of his friends, the most unruly kid in town “Saijo” (Takuya Ishida), gets caught for speeding while riding his bike down a hill by a local police man (Kuranosuke Sasaki) who always upholds the law and good manners in the town.

Unable to stomach getting a ticket, the two and their friends hatch a plan, wondering if they can get revenge on this local cop. They hit upon an idea to play a spectacular series of practical jokes on him. The students, laying inventive plans, have a showdown against the policeman, who is drawn into the battle despite his intentions.

In the middle of it all is an once-in-a-lifetime plan to steal and launch fireworks for Mika, an elementary school girl who has fallen seriously ill and refuses a surgery. Can they succeed and convince her of the surgery when the cop is on the way to stop the thievery?