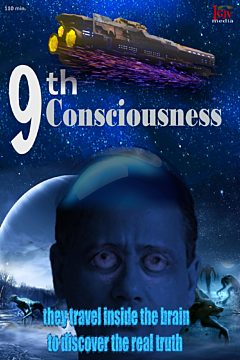 The country is the middle of a crisis, it's divided. Unrest is becoming umbereable. The president is loosing it, following his sensational histrionics nature, everythng is in the brink of a major breakdown, risking an unstoppable civil war.

The president cannot be changed or attempting to eliminate him even attempting a plot, it would generate a worsening tension in the streets.

There is a solution.

There is a research of miniaturization on the course. The idea seems forming, and becoming the only chance to avoid the ultimate disaster. A trip! A trip inside the brain of the president to manipulate his 8 consciousnesses to restore the right wiring to make him realize the truth of his country and ultimately to act properly to reunite the population.

The president is kidnapped. And the team is bringing him to the lab where the ambitious attempt is conducted, in hurry the scientists prep the adventorus trip to engage with a look like "spaceship". The team is made by 4 professional pilot/scientists, the one to depart toward the president's brain.

The made it in, They have to accomplish the mission to wire the consciousness, and they don't know what they will find in. It's a question mark what they should face. They are assuming to deal with electric impulses. They will have a limited time in and they would be destroyed inside the brain after that.

They, inside, after few windings, they recognize to enter in the first consciousness. They will deal with energy sparks and lights, sounds, and waves of magnetic fields.

Basically, going through the consciousnesses (as they are functioning related at the reality of pychology) they meet different situations, until they start to arrive to the number 6, 7 and 8, Where they are stored experience since birth and even since when human being existed. In these consciousness, which are more related at the real life experiences, the impulses materialize as creatures. Representing the president life experiences. mutant creatures, like we do in the dreams, from real people to fantastic figures, which represent fears, desires, karma.

A battle is on going beween such creatures, the controversial happening inside the president brain, leading him toward his odd behaviors is at full gear.

The team of our protgonists get involved. They attempt to repair the damage. But the battle get out of hand. It seems they are risking their lives,and in the brink of such happening. They manage to escape, and seems that the mission is failing. The time is running out. They have to achieve the deep end of the last consciousness, where it's stored all information at birth, and before birth, it's a last chance. In there perhaps they would change occurrences in order to make them bounce to the other previous consciousnesses. and also the get into the exit point.

The exit point is gone. It cannot be found. They catch a crack, mysteriously, a brigh flooding lights shines from it. They go to check.

One of them takes a pick, even it would be extremely risky. but there is nothing to lose since the exit point is not in there. There is a huge place, with bright fluid in the bottom, like a milky shiny and sparkling liquind, dense. They manage to get inside such place.

It's calm, smells good, they can breath, they feel calm and with no fear, even if the life is at risk since the entry point in not yet individuated.

They understand that must be another consciousness, the number 9!