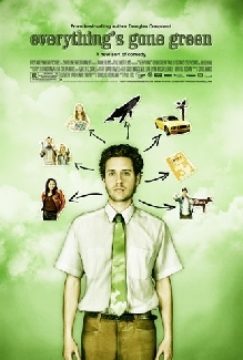 "EVERYTHING'S GONE GREEN is about when you get older and you feel certain doors closing very quickly on you. It deals with that feeling of now or never." - Douglas Coupland

Ryan, late-twenties and not getting any younger, is tempted into a money-laundering scheme, but struggles with his ill-gotten gains while trying to find happiness.

Ryan tries hard not to try hard, but is surrounded by over-achievers. His hippie friend has gone capitalistic in a not-so-legal way. His older brother has always been capitalistic in a legal-if-not-so-ethical way. And his father, after losing his job and his faith in the system, has found profitable promise outside of the establishment. Even the woman he desires is comfortable being supported by a big-time car thief.

As Douglas Coupland has done in the past, new questions are raised about the period we live in. Is it possible to just drift into the new century? Is the middle-class facing extinction? When is "enough" enough? And is there any hope that not everyone wants to be a millionaire