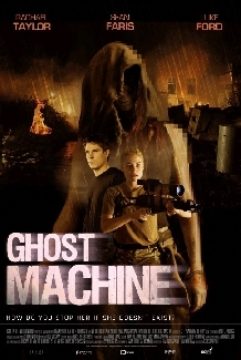 Four computer game enthusiasts experiment with borrowed military virtual reality software and are threatened by a vengeful ghost that enters the game. Thrill-seeking military technicians and computer-game enthusiasts Tom and Vic recklessly smuggle a top-secret, virtual warfare training programme out of their base and into a disused jail. As they begin the game they learn to their horror that a malevolent entity has infiltrated the software, a vengeful spirit which draws them into an all-too-real game of life and death. When Special Forces trainee Jess tracks the group down she embarks on a rescue mission that will take her into a virtual world as deadly as any real war-zone - she becomes their only hope for survival. US Military technician Tom and his Australian sidekick Vic "borrow" a top-secret virtual warfare training program used to train Special Forces recruits at a British army base. With computer-game enthusiasts Benny and Iain, they set the equipment up in an old disused jail not far from the base and settle down for a night of extreme gaming. However, the others are not aware that Tom has a hidden agenda - knowing that paranormal activity has been witnessed in the jail, and with this sophisticated equipment and some unsuspecting volunteers, he is looking to find himself a ghost and capture it on the hard drive. Tom's hunch proves correct and when Benny, Ian and Vic enter the virtual world of the jail, they soon realise that they are not alone. Prisoner K, a dangerous cyber-terrorist, captured, interrogated and murdered some years previously, stalks the dark corridors of the jail and when the sophisticated beacons and sensors are switched on, she is able to enter the game. When she does, gamers start dying - and not only in the virtual world. When Vic's girlfriend, Special Forces trainee Jess, turns up, she becomes involved in a rescue mission to extract the remaining gamers trapped inside the virtual prison world, before Prisoner K finds and destroys them. But Jess's search becomes even more difficult and dangerous when the malevolent entity starts to manipulate the environment of the game and time and space itself starts to shift and change. Prisoner K's powers are increasing and it soon becomes clear that the military mainframe itself at risk if the ghost is uploaded into the software. Tom has 15 minutes before his superiors shut the game down, trapping his surviving colleagues in cyber-space and denying him the ultimate prize - the capture of Prisoner K on the hard drive. It is only the unexpected arrival of Sgt Taggert, a disgruntled soldier from the base with a grudge against Jess, that provides Tom with a chance of achieving his goal. A dark secret is revealed, linking Taggert with the death of the prisoner years previously. Using the sergeant as bait, Tom sets one final trap for the ghost, while the minutes tick away and the fate of Jess and Vic, still trapped in the game, hangs in the balance.