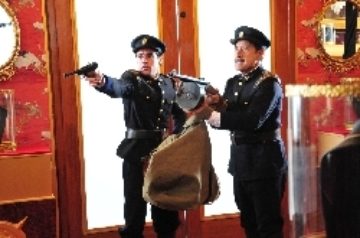 Winter 1956. Juan Domingo Perón is in exile in Panama in June, last year he was ousted as president of Argentina during a military coup.

The problem for the exiled Perón is that he is broke. His Swiss bank accounts have been frozen and he hardly has the funds to live, let alone organize a resistance in Argentina to fight against the coup.

One of his assistants (Landa, in the film) comes up with the idea of selling the valuable jewel collection of Eva Peron (who passed away in 1952). But the General will hear none of it: “Eva’s jewels can never be sold, they are a patrimony of the Argentine people!”
So the adviser decides to pawn them without his boss’ permission. He travels to Madrid, meets with a famous merchant and gives him various jewels in exchange for 5 million pesetas to be returned in one year, plus 20 percent interest. The deal is closed and Landa returns to Panama with the money.

But alas! misfortune strikes and the legendary jewels are suddenly in danger. When the Peronists find out they plan a robbery to recover them: one of the most insane stings in the history of crime.