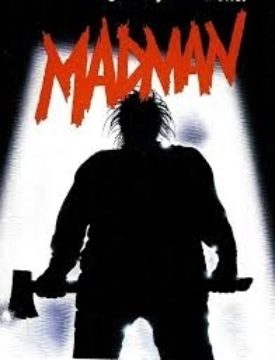 Around a crackling campfire, T.P, one of the head counselors at a camp, sings the spooky, "Song Of The Fifth Wind", to the campers and counselors: Betsy, Ellie, Dave, Stacy, Bill, and Max, the older camp director. After T.P. finishes the song, Max begins to tell the lurid tale of Madman Marz. "Now it's time for my story. It's about a local man who used to live in that broke down house." He points into the woods, through the trees to a dilapidated old house bathed in shafts of moonlight. "He went crazy in that house and killed his whole family with an axe. He then, drove to the local tavern, took a seat on his regular stool, placed the bloody axe on the bar, and ordered himself a beer. When the townsfolk got word of the murders they went mob-crazy, dragged him out in a terrible brawl and lynched him from a nearby tree. He cursed them all as they struggled to hoist him into the air-- he was a mountain of a man-- and someone struck him in the face with an axe, leaving a deep ugly cut. They left him swinging in the cold night air, but when they returned the next morning to collect his body, only the frayed noose twisted in the dawn light. Marz had disappeared, never to be seen again by anyone--well, anyone that lived to tell about it that is."