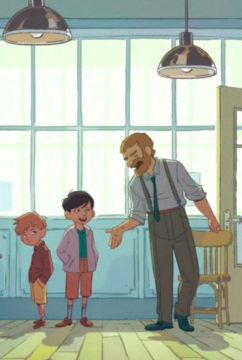 My Father’s Secrets is an important and thought-provoking film that focuses on a family’s journey to reconciliation after facing the trauma of the Holocaust and Auschwitz.

Famous Israeli author and renowned cartoonist, Michel Kichka is the son of a man who was the sole survivor of his family, all of whom were killed in the concentration camps.

At 20 years old, Michel’s father returned to his native Belgium, fathering four children, two girls and two boys. In response to their father’s life being so devastating, his children have never stopped wanting to free themselves, each in his or her own way.

This intimate and poignant story, told in a unique and touching tone, could only be done justice through animation. A story about survivors and the triumph of the human spirit.