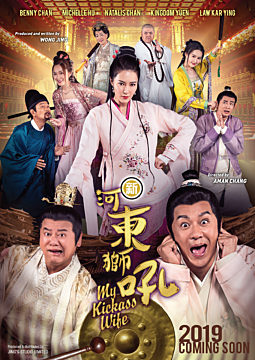 Beautiful Jade (Michelle Hu), who often plays music for the King (Natalis Chan), is in fact a skilled fighter and the secret bodyguard of the King. The prince of the Jin Empire attempts to assassinate the King a couple of times, but are all repelled by Jade. The King is a womaniser, but he is very scared of his wife - the Queen (Kingdom Yuen). The Queen is worried that the King may have his eyes set on Jade, so she confers on Jade the title of “Royal Sister” and helps her to recruit a husband who shall be a master of both the pen and the sword.

Minister Su (Law Kar Ying) picks several distinguished young men as candidates for Jade, including Sean Chen (Benny Chan), a talented scholar yet weak fighter; and Yale Qin (Dominic Ho), a well-rounded fighter and scholar. Jade falls for Sean at first sight and secretly helps him win the contest. In the end, Sean defeats all of his opponents despite that he doesn’t know how to fight.

On the wedding night, the groomsmen are all drunk and are teasing the newly-wed in the bridal chamber. Jade cooperates grudgingly at first, but is enraged with the guys going really beyond the boundary. She then uses her special stunt “Lion's Roar” to kick everybody out of the house. Sean is shocked to know that he has married a nasty wife. Jade promises Sean never to hurt him if he is loyal to her. Sean finally lets his guard down under Jade’s sweet loving words.

But the good days are short-lived. A new brothel, Kalos House, is opened in town. A lot of fine and notable men are attracted to it, including His Highness the King. The King asks Minister Su to arrange a visit to the brothel, yet Su in turn asks Sean to keep them company. Sean meets Muse Qin (Jacky Cai) at Kalos House. They fall in love with each other instantly, which threatens Jade’s status as Sean’s wife.

It turns out that Melody is the spy sent by the sixth Prince of the Jin Empire. She is trying to separate Jade and Sean in order to hijack the King and Sean, whose lives are now in danger…