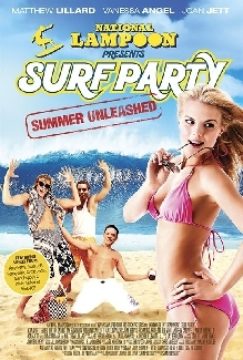 In the vein of “Dazed and Confused,” “National Lampoon’s Surf Party” chronicles 24 hours in the life of a group of teens living the dream of babes, brews, and bikinis, one last time before high school graduation.

While California is known as a surfer’s paradise, that doesn’t mean life is perfect in the pristine beach community of Ventura. The biggest problem—city kids from “The Valley.” In Ventura, they have a “locals only” policy and anyone from the Valley is looked upon as the enemy.

When JD’s (Khan Chittenden, TV’s “Blue Water High”) custom-made, prized surf board is stolen by a Valley kid, JD and his friends enlist Mooney (Matthew Lillard, “Scooby-Doo!” “Scream”), a veteran Ventura surfer, to help track down the thief and get the board back.

The crew heads into the Valley and retrieves JD’s board from the enemy’s clutches, just in time to return to Ventura for the biggest Surf Party ever!

“Surf Party” is a rockin’ good time, with a soundtrack featuring songs from Katy Perry, Joan Jett (who also stars in the movie), Pennywise, and Travis Barker.