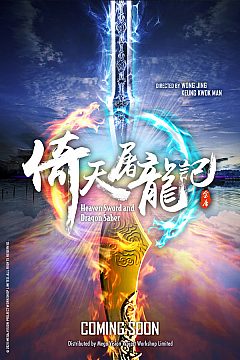 The Heaven Sword and Dragon Saber have set off numerous bloodbaths and carnage in the kungfu world. Wudang master Zhang Cuishan (Louis Koo) lives in the Shangri-La Ice and Fire Island with his family, away from the dissension and bloodshed. Twelve years later, they were ambushed when returning to Wudang for the 100-year-old birthday celebration of his master Zhang Sanfeng (Donnie Yen). Their young son Zhang Wuji (Raymond Lam) was orphaned.

A secret power tries to instigate the Big Six Sects to annihilate the Ming Sect. Wuji shows up to rescue, eventually emerges as Lord of Ming Sect. The Big Six Sects are attacked one after another, Wuji sets off for Dadu for rescue. Everyone around Wuji has their own plot. His perspective of good and evil have switched. Shall he trust the princess of the Yuan Empire Zhao Min (Janice Man), the master of Emei Sect Zhiruo (Sabrina Qiu) or the holy lady of the Ming Sect Xiaozhao (Yun Qianqian)?