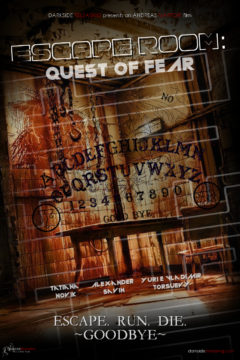 Moscow: In the cold Russian winter, the young Stepan is preparing to celebrate his birthday on Halloween. His friends are with him. Attracted by the calling of disturbing messages from an entity that manifests itself through a Ouija board, the friends decide to celebrate the evening by going to a “Quest”, or as it's also known in the West, an Escape Room. When they arrive, the group is assigned to escape mad cannibal psychopaths let loose in the labyrinth of an old Moscow palace. At first the game seems fun, but soon an old blood vendetta sets off the Quest Master, who has sent a real sect of sadistic mad killers agains the young group, who suddenly find themselves in a frantic search for an escape from the maze of the game itself and the incomprehensible paths taking shape in the anguished minds of the bloodthirsty antagonists. Quest for Fear is also based on a series of Moscow's urban legends.