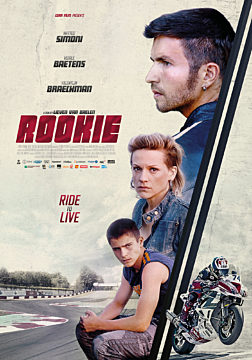 ROOKIE follows the story of Nicky, a young ambitious and confident pure blooded motorcyclist. He always puts his life on the line while racing, not for the money but for kicks, respect and fame. When he gets into an accident, his world crumbles apart, not sure whether he’ll ever be able to race again.

He has trouble accepting this new life and turns to his sister-in-law Vero and her son Charlie to start over. But the adrenaline junkie inside him rears his ugly head and Nicky tries relive his dream by coaching his nephew Charlie. It quickly becomes clear though, that they’re not cut from the same cloth.