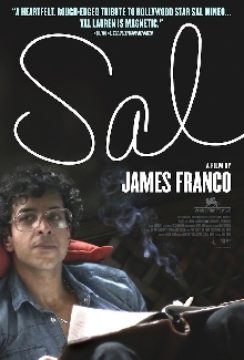 James Franco’s SAL chronicles the final hours of the life of actor Sal Mineo, one-time teen idol and star of the blockbuster films REBEL WITHOUT A CAUSE and EXODUS. Although inspired by actual events, the film is not a traditional biopic rather, it takes the viewer on an intimate journey through the very last day of Mineo’s life. On February 12, 1976, Sal Mineo was no longer the marquee sensation he had once been, but he was finally, after years of heartbreaking setbacks, finding his way to becoming the actor and director he had for so long aspired to be. He was set to direct his first feature film, and was only days away from opening in a play that had already won him rave reviews in San Francisco. Sal Mineo’s life was finally coming together, only to be viciously cut short by a lone attacker and a senseless crime. In Sal, the audience is drawn into Mineo’s world and allowed to experience his final hours, both his highs and lows, the exciting and the somewhat mundane, that ultimately led to a shocking and horrifying conclusion.