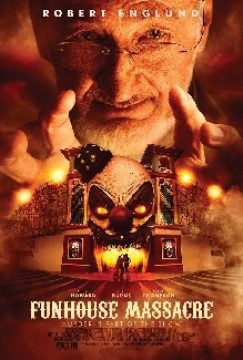 Statesville Asylum officially closed its doors decades ago, but stories told around the camp fire spoke of inmates whose crimes were too gruesome for the evening news. Maniacs you only hear whispers of in your nightmares. Unfortunately for the residents of Macon County, these stories are true and these sociopaths are very real. Mental Manny- the silver tongued profit, Dollface- prefers her victims in stitches, Rocco the Clown- the ex-wrestler who "accidentally" killed too many opponents in the ring, Dr. Suave- no cavity is too deep for his drill, The Taxidermist- never met a person he didn't want to stuff, and Animal the Cannibal- a chef who's feasts were to die for. This year, on Halloween night, these six deranged psychopathic killers escape and descend upon a funhouse based on their gruesome acts of carnage, with the goal of inflicting one final night of terror, that will go down in history as the bloodiest night this country has ever seen. Blending in and picking off select victims in the beginning, the unsuspecting and desensitized carnival goers think the blood and guts are just part of the act... until everyone is locked in and our killers have an open playground with plenty of screaming presents to rip open. The only hope for anyone surviving the night rests on the shoulders of a rag tag group of college kids from the local diner, a clueless but well intentioned Deputy, and the towns tough as nails Sheriff with a dark past. Welcome to THE FUNHOUSE MASSACRE, where murder is all part of the show...