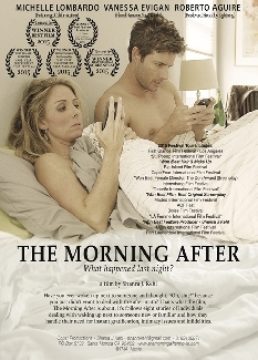 Have you ever wonder what happens to people when they wake up in the morning after the one night stand when they realize who did they woken up with? The Morning After is the clever, funny, sweet and very real film that shows exactly what happens. The feature consists of 8 love (and not so much love) stories that are intercut throughout the film. Eight individuals wake up next to someone and they must decide if they should stay or if they should go. Here’s a brief description that makes up the 8 story lines: A couple that’s been married since college – They decide to have a threesome because they feel like they missed out on a lot, including online dating. So they give it a try. A late thirty something year old girl who gets black out drunk and wakes up naked next to her gay best friend. They discover he lost his gold card status and have to deal with the aftermath. On again off again exes – The guy tries to win the girl back but she discovers that some people never change. A Vegas hook up, turns into something more of a fairytale. Two co-workers finally have their romantic fling but after their morning session, the girl becomes completely turned off by the guy. A guy tries to sneak out of the girl’s apartment but gets busted by her roommate. An American guy hooks up with a “French” girl in a Paris Hostel, the only way they can communicate is through love. A hot cocktail waitress does the walk of shame but has to return back to the loft with coffee and donuts because she forgot something. Awkward!

“This film’s cast is the most beautiful cast you will see this year on the big screen!” – ChromeYellow