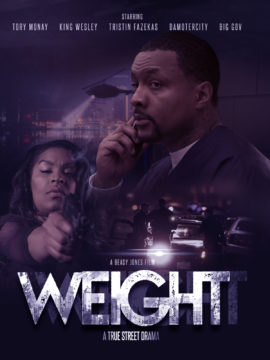 DUB and CHARLOTTE were orphaned as young children after watching their parents get killed. AUNT WENDY took them in and raised them as their own but her boyfriend taught Dub the drug business and he became king of the same streets that killed his parents. Dub spent most of his life trying to protect his little sister from the street life by keeping her sheltered and sending her to college. One day while making a routine run with a chick from the strip club ALLIE, Dub is pulled over by the police. They find an old warrant on him arrest him on the spot. A week before one of his lieutenants ROB got hassled by the police and his inside cop MITCHELL has been missing since he tried to kill Dub on the street. He feels it's a set up and doesn't know who he can trust. He's certain someone is trying to dismantle his organization. His attorney, TAMERA GIVENS tells him that based on the charges he might be looking at some real time behind bars. While Leslie works on getting the charges dropped Dub is forced to sit in jail. In the meantime, he needs someone to keep things going at home and weed out the snitch if there is one. The logical choice to take over while he's away is TURK, his right hand man over the years that knows the business inside and out. Everyone is shocked when he hand picks the very naive and sheltered Charlotte to take over the crew. Charlotte takes her new roll as king seriously. Her book smarts make her good at managing distribution and collection. And just like Dub, seeing her parents killed at a young age made her a savage. She just hid it from the world. Dub used his to make his way to the top of the street game. Charlotte will use hers to keep her brother's position safe until he can come home. Dub's crew is made up of Rob, Turk and JUNKYARD. Together, they run the west side drug business. The boys are not pleased when Charlotte takes over. But she isn't phased and quickly shows them why Dub chose her to take over. When Rob comes up missing, its assumed he was the snitch. Junkyard and Turk decide to give his territory to FAL, a tough lesbian who worked side by side with Rob. Charlotte, (who goes by Charlie now) isn't convinced that Rob is the guy. But she's determined to find out what happened to him, where Mitchell disappeared to, and how all of this connects to Dub's set up. What she learns will shock and amaze. And what she has to do to protect her brother William.