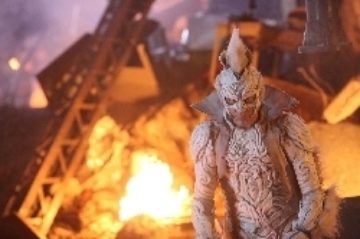 15 years since Zebraman's epic battle with the aliens... In 2025, Zebra City is a model metropolis that undertakes experimental political reform. One of these experiments is "Zebra Time". At 5 am and 5 pm for five minutes every day, the law permits any and all criminal acts! Potential criminals as well as the sick and elderly are annihilated... After the implementation of Zebra Time, the crime rate declines making Zebra City the safest metropolis in the world, and black and white are defined! On the completely transformed streets of Tokyo, Shinichi suddenly wakes up and has lost his memory. It is exactly 5 am when Zebra Time starts! Then, a cop from the Zebra Police fires at him!
Around that time, Zebra Queen, the top super idol who is actually the governor's daughter Yui acts as a billboard for Zebra City, not only for reigning this realm but make solid progress with the hopes of world domination.
Meanwhile, Shinichi encounters Asano-san, working as a doctor and Sumire, a mysterious young girl at the evacuation area. When Shinichi brushes up against her, a part of his body changes to zebra stripes! At that very moment, his lost memory is restored! In almost perfect attunement, Yui goes into violent convulsions as Zebra stripes appear on her physique!
Now, a black-and-white battle of good versus evil, with the fate of the world hanging in the balance, begins!!