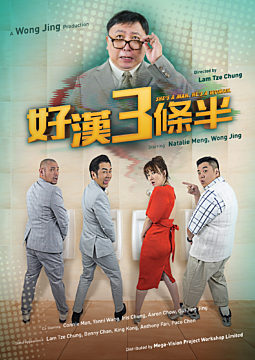 Hank Zhu (Wong Jing) is a manager of a leading property agency. His three subordinates, Fish Ball (Lam Tze Chung), Robert (Benny Chan) and Chester (King Kong), are both his close workmates as well as drinking buddies. There is a female manager in the company, Lara Tong (Natalie Meng ), aka Sister Chili, whom they all dread. Lara is a diplomatic and charming lady. In a lot of social occasions, men are attracted to her like bees to honey, hence beating Hank’s team to the punch.

On the other hand, Lara’s boyfriend Jason Wong (Aaron Chow) breaks up with her as he can no longer stand her bossy and dominant character. Grieving her love, Lara gets herself drunk. She goes to the company’s rooftop by herself, and is ready to jump. There she chances upon Hank, who is also depressed and is ready to end his life. At that very moment, a thunderstorm hits and they are both struck by lightning.

The two wake up in a hospital to find their bodies “switched”. Being trapped inside Hank’s body, Lara cannot even move. Hank tries to tell his three buddies and his wife what has happened, but they only think Lara is joking with them. Before he can figure out a way to swap their bodies back, Hank has decided to live Lara’s life while in her body, and make the best out of everything. Hank even uses Lara’s identity to apologize to Jason, and promises to change “her” overbearing attitude. Jason is deeply touched and finally forgives Lara.

Can Hank and Lara finally get back into their own bodies? Or do they have to spend the rest of their lives using the other’s body and identity?