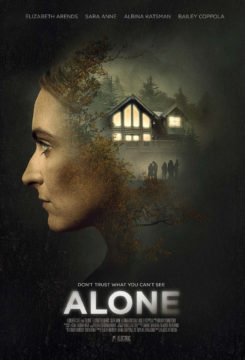 Emma, a blind writer who’s just been through a horrific experience, is told by her doctor to find an isolated spot away from the city to get some peace of mind and finish the book she’s been writing. Following his advice, Emma decides to spend some days in a summerhouse that belongs to one of her old friends, Robert. He takes her there, with a flirtatious attitude, even though he’s slightly older and married. Jill, Robert’s wife, greets Emma outside the house in a forested area as soon as she arrives, but all the blind woman wants is to be left alone.

In the house, Emma remembers the traumatic experience she had, which resulted in her losing her baby in a miscarriage. Currently, she carries with her a 3D printed ultrasound of the unborn child. From the first night, Emma becomes weary of the house, which is seemingly empty, but she can’t help but feel like someone else is in there with her. There’s creaking echoing all around her, she manages to see blurs that resemble a person staring at her, the security alarm goes off without anyone breaking in, her tape recorder with which she records her book changes places constantly. She’s convinced something isn’t right.

Parallel to Emma’s story, a group of four teenagers - Hailey, Luke, Nicole, and Jesse - make their way to the same summerhouse. Even though they’re all friends, Nicole and Jesse don’t get along very well, and Luke sheepishly attempts to flirt with Hailey, but something is clearly bothering her. As they get to the house, which is empty, they’re taken over by the same feeling that was bothering Emma - something is happening in the house. Initially, the group is shocked by a couple of jocks, Daniel and Nate, who’d arrived with the intention of scaring them. Nicole had invited Daniel, her boyfriend, but she didn’t know he’d bring Nate along, who’s Hailey’s ex.

As tension rises between all the teenagers, both storylines start intertwining as details from Emma’s story become more and more present in the teens’, slowly bringing both of them together to a conclusion. Could they be being haunted by the same entity?