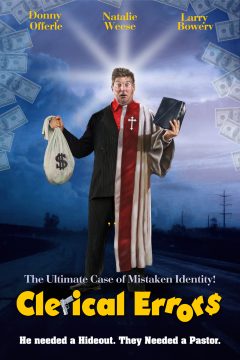 It's always been the crooked path to easy street for Vinny. But when a routine bank heist goes terribly wrong, Vinny runs out of options. Hiding out in a small-town church, he is discovered - and mistaken for their new pastor. It's a 'baptism by fire' as this crook-who-would-be-clergy struggles to keep up appearances, stumbling through sermons and sacraments! Bad turns to worse when "Pastor" is charged with mentoring a troubled youngster caught stealing (ah, the irony!), and overworked Administrator Mallory Ball struggles to keep all the plates spinning as the new pastor adjusts. Through it all, Vinny begins - for the first time - to understand real love and forgiveness. But when his devoted congregation finds out the truth, will they be able to forgive him?