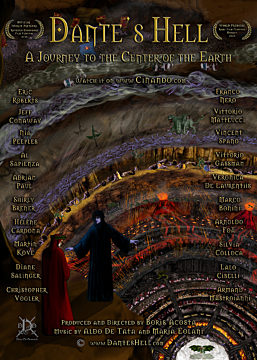 Dante's Hell is a 108-minute feature documentary, depicting the story of a man that went on a journey through the worst of the afterlife, Hell, to finally consummate his love relationship at the gate of Paradise (3rd sequel). Dante's Hell is an official selection at the Ravenna Nightmare film festival in Italy screening virtually from October 31st to November 8th.

"Dante's Hell" is about Dante's own journey through the first part of the afterlife, Inferno. The story is of an Infernal journey circle-by-circle and presented in an unprecedented and unique way that no other documentary has done until now. "Dante's Hell" is a visual and narrative journey to and through Hell. For this documentary, several scholars and artists were interviewed about Dante's Inferno in both Italy and the United States.

"Dante's Hell" is a family oriented thriller and four-quadrant breakthrough documentary based on Dante's Inferno story, the first part of The Divine Comedy literary masterpiece, written by Dante Alighieri in Italy between 1302-1313. It is also based on the recently finished thesis "Dante's Hell Decoded", which introduces to the academic world a new vision of Hell never thought about before. Visually, it features most of Gustave Dore's illustrations as well as over 70 original paintings from the "Inferno - The Art Collection" book by Dino Di Durante, and excerpts from Dante's Hell Animated film. It also features clips from the historic Italian film "L'Inferno - 1911".

In addition, it features a completely new re-painted 75-piece art collection by Dino Di Durante, never seen before, which visually supports the thesis above "Dante's Hell Decoded" and Boris Acosta's vision of the Anunnaki.

Feel free to watch this film on Cinando.com at your convenience.