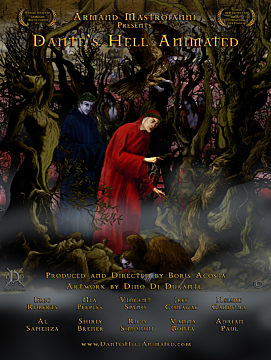 Dante's Hell Animated is a real and truthful epic animation film that embarks Dante Alighieri's journey through the first part of the afterlife, Hell. It is a compelling four-quadrant film presented circle by circle in a chronological descent to the center of Hell, and to the exit into Purgatory. It features the voices of Eric Roberts as Dante, Vincent Spano as Virgil and Nia Peeples as Beatrice among several known celebrities from Hollywood.

Dante Alighieri goes on a journey through the first part of the afterlife, Inferno. It is presented in a chronological descent circle by circle to the deepest of Hell. Dante is guided by his hero Virgil through each circle of Hell and their subdivisions until they reach the center of the Earth and emerged to the other hemisphere into Purgatory.

Dante's Hell Animated is a film created with teenagers in mind to give them the opportunity to learn Dante's teachings about life while they grow up. The images are as compelling as the story itself. This film has two versions, one is historically recited in primitive Italian in Dante's own words and the other one is narrated in English for a better understanding in its non-original language.

It features over 50 original color illustrations from the upcoming Dante's Hell book and comic magazine series, put together in a series of animation clips that will delight a young as well as an older audience. All the images used in this animation film were originally created by Dino Di Durante.