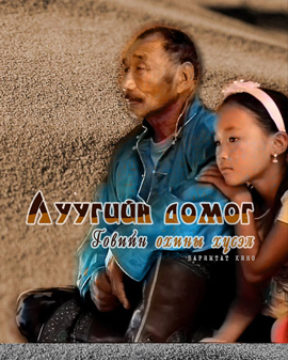 This documentary is about Tarbosaurus Bataar fossils that was recovered in Mongolia
in 2013. Elder Mijid T. originally from Mandal-Ovoo sum, Umnugovi province,
lives with her daughter Onortuya M. They live in Bulgan sum, Bayan-Zag. Bayan-zag
contains many fossils of dinosaurs from millions of years ago. In 2013, there was a
big boom worldwide about Mongolia bringing back the fossils of Tarbosaurus Bataar,
which were illegally taken out of country.
Buyanjargal G., who lived in U.S. for the last 10 years, came back to Mongolia and
got hired at the museum of Tarbosaurus as a museum guide. In order to guide better
at the museum, Buyanjargal has decided to go to Bayan-Zag, Bulgan sum to learn
more about dinosaurs. There she meets a 12 years old girl Tsendsuren, who is highly
interested in Tarbosaurus. This documentary was filmed in the homeland of dinosaurs
Bulgan sum, Bayan-Zag of Umnugovi province..