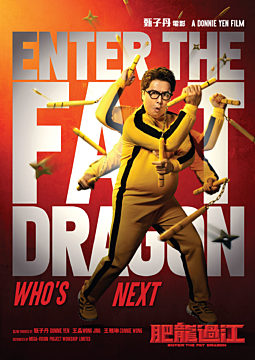 Fallon Zhu (Donnie Yen) is a Hong Kong police officer. In the eyes of the public, he is an agile fighter with a high crime detection rate, a police role-model. Unfortunately, his fiancée Chloe (Niki Chow) dumps him before their marriage. Heartbroken, he indulges in food to relieve his pain. In half a year’s time, his endless intemperance transforms him into a 200+ pounds being.

His superior, Superintendent Huang, puts him in charge of a routine mission to escort a convict to Japan, so he can lose some weight and pressure as a side-plan. However, a series of mishaps befall him in Japan. He loses all of his belongings, and above it all, he loses the convict in his custody. His luck turns when he encounters Thor (Wong Jing), a fellow Hong Kong citizen who helps him out of his ordeal.

But the respite is short-lived, his convict suffers a mysterious death. In order to complete his mission, Fallon and Thor join forces to solve the puzzle. To everyone’s dismay, troubles continue to snowball, even the people around Fallon are being dragged into the mess. Fallon is determined to uproot the gang, regardless.