홈페이지 / 영화 / From Vegas To Macau 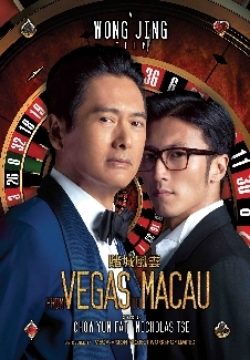 From Vegas To Macau

The world renowned “Invincible Hand” Ken (CHOW Yun Fat) could identify not only mahjong tiles, but also cards with his fingers which had made him a legend. Upon his retirement as the Chief Security Consultant in Las Vegas, Ken returned to his hometown Macau, where he met his old friend Benz (Benz HUI), and Benz’s son Cool (Nicholas TSE) and nephew Karl (Chapman TO). Both Cool and Karl wanted to follow Ken. Ken claimed that if Cool could successfully cheat him once or win over him, he would then accept Cool as his protégé.

Cool’s step brother Lionel (Philip NG), an undercover agent, had disguised his identity in an international gambling mafia which had planned to form an alliance with mafias in illegal gambling from all over the world to control the result of soccer matches. Lionel had recorded the entire conference, with the criminal evidence kept in an imitated eye. The eye was coincidentally given to Rainbow (Kimmy TONG), Ken’s only daughter, which put her in danger. The retired Ken was forced to use his “Magic Hand” once again to uncover the evil plan…