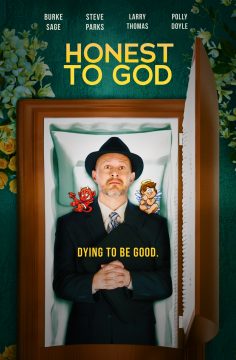 “Honest to God” is about a successful small-town middle-aged insurance salesman and family man named Daniel Adams (Burke Sage), who lives in the quaint town of Bethany, IL with his wife Becca (Polly Cassiday Doyle) and his two fully grown children, Dylan (Tyler Burke) and Chloe (Brooke Galvan). Daniel also has a childhood friend name Benji (Steve Parks), who happens to be bipolar and has had many difficult and unfortunate turns in his lifetime. After experiencing repeated chest pains over a period of time, Becca talks Daniel into an appointment with Dr. Hajia (Larry Thomas), a famous celebrity doctor who just opened up a new office in town. Much to his surprise, the quirky doctor gives Daniel only three weeks to live. Scared to death and faced with his own mortality, Daniel, a somewhat nominal Christian, says a prayer to God promising he’ll be a better Christian if He would heal him. However, after starting down the path of his own self-projected redemption, Daniel finds out he’s actually not suffering from a terminal illness and has been misdiagnosed. Yet, the promises he made to God still remain, and as time goes on and as the consequences of Daniel’s behavior unfolds, he is somewhat forcibly and reluctantly met head-on with the dilemma and decision of whether or not to still make good on the promises he made to God. As a result, Daniel is comically and yet deeply confronted with his own faith, or lack thereof, and what a promise to God truly means.