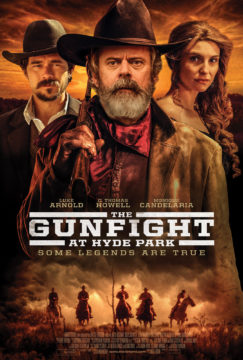 Based on one of the most intense gunfights in the history of the Wild West, Hyde Park tells the story of the rival Sheriffs Mike McCluskie and Billy Bailey and the war waged in South Central Kansas during a 24-month stretch in the early 1870s. With an almost overnight explosion, Newton found itself in the cross hairs of two rival communities, the Ohio rail road workers and the Texas Cattle Ranchers who sought to take over the land between their ranches and the tracks. Former Train Policeman and roughman Mike McCluskie is hired by the Santa Fe Train Depot to try to keep the peace. During the election season of 1871, tensions mounted and the patrons from both sides began taking out their frustrations at the town’s brothels and saloons. The Texas Cattle Ranchers, determined to stake a claim in the city, inserted their own political force, equipped with their own sheriff, the dangerous and violent Billy Bailey. A cast of Western characters began taking hard line positions. Anchored only with the support of James Riley, a vagrant 19-year old boy dying of tuberculosis, McCluskie took it upon himself to rid the town of the Texas Cattle Ranchers once and for all. And, the rest, as they say… is history.