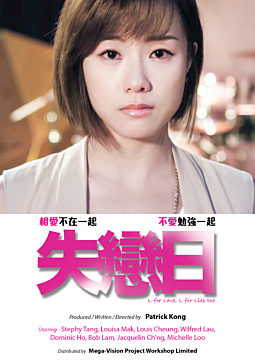 L for Love, L for Lies Too

Bo (Stephy Tang) is an ordinary office lady. Her mother (Elaine Jin) was a very successful and famous singer and her sister has just started to be an idol singer. Comparing herself with her mother and sister, Bo dwells a lot on herself being non-outstanding and she feels upset to be ordinary.

Bo and her boyfriend Sun (Wilfred Lau), who works as a finance broker, are together for many years. She always wishes to start a family with him. However, Sun has been fooling around for years and his flippant attitude has pushed the idea of marriage away.

Bo’s boss, Fanny committed suicide after breaking up with her boyfriend. Bo shared this tragedy to her best friend, Laura (Louisa Mak) who is a typical conspiracy theorist. She immediately threw out a bunch of nonsense theories threatening Bo that people around her will soon have problems with their relationships, and in the end, Bo will too.

One night, Bo found out that Sun has an affair. She was shock and distressed. So, she decided to have a drink at the bar, where she nearly fell into a trap by three frauds: Fay (Louis Cheung), his partner Hung (Bob Lam) and Jac (Jacqueline Ch’ng). In the end Bo got lucky and escaped. Fay noticed Bo was calm and unafraid when facing dangers. He was impressed and decided to invite Bo to join their team.