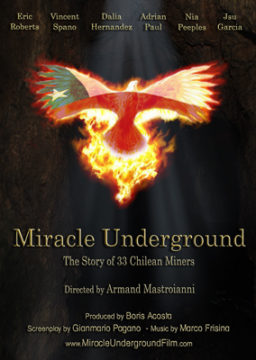 Miracle Underground is a fictionalized account of the 33 Chilean miners' ordeal, told from a spiritual point of view, as each one of them individually came face-to-face with the real prospect of death after 70 days underground with no word from the outside world. The film explores the emotional, spiritual, and psychological experiences of the 33 men, and how they were able to survive both physically and mentally in a situation that no human beings have emerged from alive before. The film will show the desperation, as well as the discipline, of 33 Chilean miners who wanted to live, in part so they could help other miners demand safer working conditions. The story is presented in a chronological unfolding of events, from the descent to almost 700 meters below the surface, to the rescuing of all the miners by the custom-build Fenix 1 and Fenix 2 capsules. The story also shows the determination of the miners' wives to call the attention of the Chilean people, including President Sebastián Piñera and his cabinet, and the world in general, to the necessity of locating the miners and rescuing them alive.

Miracle Underground is currently on Pre-Prod and we are entertaining pre-sales.