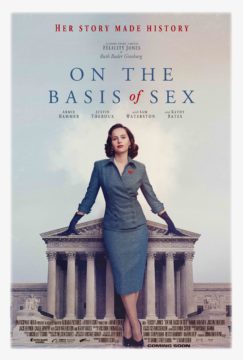 On the Basis of Sex

Inspired by a true story, On the Basis of Sex is the stirring and spirited film that follows young Ruth Bader Ginsburg­, a new mother and an attorney struggling in a field dominated by men. The film details the early days of her fight for equal rights for women. When Ruth (Felicity Jones) takes on a groundbreaking case with her husband Marty (Armie Hammer), she knows it could forever change the way the courts and the United States view gender discrimination. The film also chronicles the storybook-like romance between Ruth and Marty, a partnership that succeeded both personally and professionally.