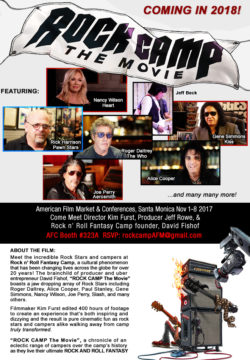 Meet the campers at ROCK CAMP, an institution and cultural phenomenon that has been going on in Los Angeles, New York and other cities for 21 years. The brainchild of music producer David Fishof, ROCK CAMP boasts a jaw-dropping array of rock star counselors including Roger Daltrey, Alice Cooper, Paul Stanley and Gene Simmons, Nancy Wilson, Joe Perry, Jeff Beck, Slash, Meatloaf and many others. ROCK CAMP follows a range of campers over the camp’s history as they live their rock and roll fantasy.

If Rock Camp Is Oz, David Fishof is the Wizard, with campers and rock stars alike walking away from Camp transformed. The experience is both inspiring and dizzying; and the result is pure fun.