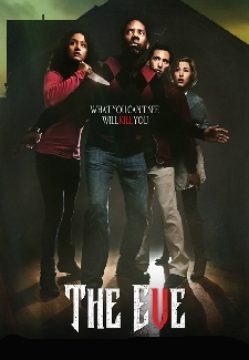 Friends head off to the remote island of Martha's Vineyard to celebrate New Year's Eve and reconnect. As tensions rise, an unforeseen presence halts celebrations and instead turns their holiday into a fight to live through to the new year.

The dead of winter trees are bare, snow is on the ground, and waves pound the shore. A ferry arrives at the isolated island of Martha’s Vineyard just in time for New Year’s Eve.

SCOTT (Al Thompson), HARRY (Evan Bass), and JENN (Maria DiDomenico) are friends from college who have grown apart. LACEY (Miranda Noelle Wilson) is Harry’s new girlfriend, a trophy for him to show off to Scott.

They arrive at Scott’s family vacation home thinking they are alone and are spooked when they come upon JOEY (Rick Estabrook), the introverted groundskeeper. To be nice, they invite him to join them in their New Year’s Eve celebration the following night.

The calm of the island, along with a lot of wine, helps to bring everyone together. Although it isn’t long before old problems creep back in. After a misunderstanding, words between Scott and Harry turn into blows and all four are separated on the island.

Hours pass and Harry returns to the house to find Jenn and Lacey waiting. Scott still hasn’t returned “It is not like him.” After much pleading, Harry agrees to venture out with Jenn to find him.

They find his lifeless body on the beach.

Returning to the house, Harry, Jenn, and Lacey are panicked. Harry tries to call for help, but the phones are dead. They rush out to the car, but it is also dead. Jenn notices that someone has removed the car’s main battery fuse. She is the first to realize that Scott was murdered.

They head inside and lock the doors. Arming herself, Jenn takes the lead and checks the house room by room, locking the doors and windows as she goes. Harry panics, unsure of what to do and becomes protective of Lacey. Jenn decides that they should shut all the lights off in the house and turn on all of the outside lights. This way they can see anyone who approaches the house. They just have to survive until dawn, and then can find help.

Impatient and anxious, Harry leaves to see if he can get to the neighboring house and find help. An hour passes and he has not returned. Jenn and Lacey investigate a backdoor that was left unlocked and are startled when a shadowy figure approaches them. It is Harry. He failed.

As they wait for dawn, time weighs on them and anxiety erupts in a blame game as they point fingers to each other. In the heat of friction, they break off from each other. Harry begins to lose it and attacks Jenn when he finds her going through Scott’s things.

Harry calms down and he and Jenn bond over how badly life has gone since college. He goes to check in on Lacey and finds their room empty. The window is open. Harry and Jenn see a figure outside and run upstairs. They head outside to the balcony to get a look at the intruder, but quickly regret the decision when the figure notices them.

They rush back inside and head downstairs to find Joey waiting for them. He raises a drink to the New Year.

At the beach, someone removes incriminating evidence from Scott’s body. It is revealed to be the last thing they were all expecting.