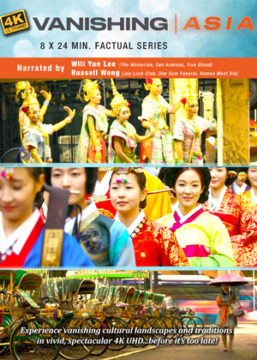 Our World is going through rapid changes and constant modernization. Yet it is also rich in tradition, history and culture. The wondrous. The astounding. The offbeat. There are unusual activities that don’t seem to fit today’s fast-paced world. The first of the Vanishing series embark on an exploration of 7 Asian countries, their artistic culture and heritage; historic places; and natural habitats. These are the disappearing gems taken for granted, until one day we realized they vanished forever. Before it’s too late, we capture Asia’s splendid past, present and future in arts, heritage, architecture and landscape -- in spectacular 4K UHD.