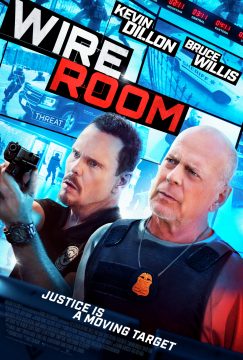 Special Agent Shane Mueller (Bruce Willis) is in charge of Homeland Security Investigations, and leads a high-tech command center called the Wire Room, dedicated to keeping the most dangerous criminals under surveillance. New recruit Justin Rosa (Kevin Dillon) shows up for his very first shift to learn that the critical target on screen that night is Eddie Flynn (Oliver Trevena), the leader of a criminal ring smuggling shipments of guns. Shane teaches Justin the basics: don’t leave the room unattended, never contact the target, but keep the target alive. When dark SUVs race up to Eddie’s home and heavily armed men spill out, Justin breaks Shane’s rules and warns Eddie of the imminent threat, then helps him take down the attackers one by one. Learning of the situation, Shane angrily orders Justin to stay put but he’s already entangled in a much bigger corruption case leading to top government levels. Shane rushes back, but chaos erupts in the Wire Room as a rogue security guard and more crooked cops seek to destroy all evidence and kill them both.